Why Is A DC Motor Core Made Of Laminations

A DC motor consists of two main components: a rotor and a stator. The rotor has a toroidal core with slots for holding the coils or windings. According to Faraday’s law, when the core rotates in a magnetic field, a voltage or electric potential is induced in the coil, and this induced electric potential will cause a current flow, called eddy current.

This explains why the motor core is made of many thin iron sheets (called electric motor laminations) rather than one large and solid piece of iron sheets. These individual sheets have a higher resistance than one solid sheet, and therefore produce less eddy current and lower eddy current losses.

These lamination stacks are insulated from each other, and a layer of lacquer is usually used to prevent eddy currents “jumping” from stack to stack. The inverse square relationship between material thickness and eddy current loss means that any reduction in thickness will have a significant effect on the amount of loss. Therefore, Gator, a China satisfactory rotor factory, strives to make motor core laminations as thin as possible from the perspective of manufacturing and cost, with modern DC motors typically using laminations of 0.1 to 0.5 mm thick.

The eddy current loss mechanism requires the motor to be stacked with insulating layers of stacks to prevent eddy currents “jumping” from laminations to laminations. 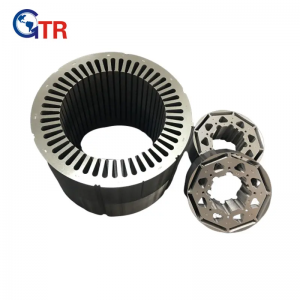