The quality of core lamination of turbine generator, hydro generator and large AC/DC motor has a great impact on the quality of the motor. During the stamping process, burrs will cause turn-to-turn short circuit of the core, increasing core loss and temperature. Burrs will also reduce the number of electric motor laminations, increase excitation current and lower efficiency. In addition, the burrs in the slot will pierce the winding insulation and cause external gear expansion. If the burr at the rotor shaft hole is too large, it may shrink hole size or increase the ellipticity, resulting in difficult mounting on the core shaft, which directly affects the motor quality. Therefore, it is necessary to analyze the causes of core lamination burrs and take related preventive measures for the processing and manufacturing of motors. 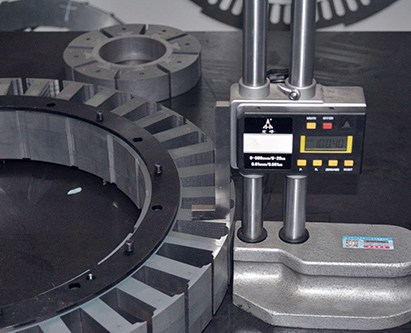 At present, domestic and foreign motor lamination manufacturers mainly produce large motor core laminations that are made of 0.5mm or 0.35mm thin silicon electrical steel sheet. Large burrs are produced in the stamping process mainly because of the following reasons.

1. Too large, small or uneven gap between stamping dies
Too large, small or uneven gap between stamping modules will have a huge negative impact on the quality of lamination section and surface, according to electric motor laminations suppliers. Based on the analysis of the sheet blanking deformation process, it can be seen that if the gap between male die and female die is too small, the crack near the edge of male die will be staggered outward for a distance than the normal gap range. Interlayer burr will form at the fracture layer when the silicon steel sheet is separated. The extrusion of the female die edge causes a second polished region to be formed on the blanking section, and extrusion burr or serrated edge with an inverted cone appears on its upper part. If the gap is too large, the shear crack near the male die edge is staggered inward for some distance from the normal gap range.
When the material is stretched hard and the slope of blanking section increases, the silicon steel sheet is easily pulled into the gap, thus forming an elongated burr. In addition, the uneven gap between stamping dies can also cause large burrs to be produced locally on the electric motor laminations, that is, extrusion burrs will appear at small gaps and elongated burrs at large gaps.

2. Blurred edge of the working part of stamping dies
When the edge of the working part of the die is rounded due to long-term wear, it cannot better work in terms of material separation, and the whole section becomes irregular due to tearing, resulting in large burrs. Electric motor laminations suppliers find that burrs are particularly serious if the male die edge and the female die edge are blunt when the material is dropped and punched.

After analyzing the above-mentioned reasons for burrs, it’s necessary to consider the following measures to reduce the burrs.

1. When processing the stamping die, the machining accuracy and assembly quality of the male and female dies must be ensured, and the verticality of the male die, the rigidity of lateral pressure, and sufficient rigidity of the whole stamping die should also be ensured. Motor lamination manufacturers will provide the allowable burr height of the punching shear surface for a normal sheet metal with a qualified die and normal gap punching.

3. It is required that the punching machine has good rigidity, small elastic deformation, high accuracy of guide rail and parallelism between the backing plate and slider.

5. Silicon steel sheet whose material passes material inspection should be used for punching.
If the above measures are taken in the stamping process, burrs will be greatly reduced. But those are only preventive measures, and new problems will occur in the actual production. Special deburring process will be conducted after the punching of large motor cores to remove these imperfections. But too large burrs cannot be eliminated. As a result, operators should frequently check the quality of the punching section during production, so that problems can be detected and solved in time to ensure that the number of burrs of electric motor laminations is within the range as required by the process.